Botanic gardens, beacons of conservation now, at one time were also very keen to hybridise various plants in their care, aiming for better qualities. NBG Glasnevin was the first garden in Ireland to breed new Escallonia hybrids. This work, encouraged by Frederick Moore, was carried out by Charles Frederick Ball, who trained at Kew and was for a time assistant manager at the famous Bees Nursery in Cheshire, from where he was head hunted to Glasnevin.

Among the Escallonia seedlings he raised was a good deep red, which he named for his bride, Alice. They married in December 1914 shortly after the outbreak of WW1 and, having enlisted, Charles was sent to Gallipoli in 1915, where he was killed in September.

Charles is remembered for Escallonia rubra ‘C. F. Ball’, which was named for him by his colleagues after his tragic death. The IGPS planted a young plant at the Irish National War Memorial Gardens, at Islandbridge, in 2016. This cultivar is normally readily available, currently 11 nurseries are listed as selling it in the RHS Plant Finder.

Escallonia ‘Alice’ has been in trade off and on over the years, but is currently not easily found, last listed in the Plant Finder in 2018, though occasionally it is at our plant sales. A few of our members and gardens grow it. It’s a good plant with vigorous growth to about 2m, with deep red flowers fading to a delicate pink. A young plant will join Escallonia ‘C. F. Ball’ at Islandbridge in the near future.

Most of the details for these notes are taken from An Irish Flower Garden Replanted by E. Charles Nelson and illustrated by Wendy Walsh. 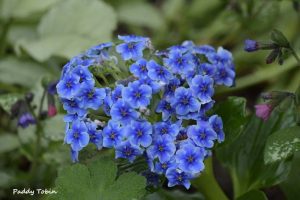