We are all used to the fact that Dutch nurseries for years have supplied massive amounts of plants to satisfy our insatiable appetite – and especially for new plants. Based in Boskoop, the centre of the nursery trade, Ronald Houtman as Secretary for the Royal Boskoop Horticultural Society and Editor in Chief of the annual publication Dendroflora, and a regular reviewer of catalogues, is a perfect person to talk about new plants – some already in trade, others still coming along. Why though do we need new plants? Many reasons of course, new colours, better form, disease resistance, longer flowering times, from the grower’s point of view they often sell better (ooohhh………we haven’t got that one), and, again for the grower – maybe quicker to bulk up so a little more profit – and remember their costs and profits are based on cents per pot.

New cultivars can arise from chance seedlings, or a natural ‘sport’ or mutation – the sort of change that can give us variegation, or purple leaves, or a slightly different flower form for instance. Some growers though have carefully designed breeding programmes, often with a desired end product, ruthlessly culling the duds, and often spanning years. Ronald showed the flowery route from Calycanthus chinensis, Chinese Sweetshrub, first flowered out of China in the early 1980s, which now has several much more colourful cultivars including Calycanthus x raulstonii ‘Hartlage Wine’ and ‘Aphrodite’. The naming though is tricky…………………..some say it should be Sinocalycanthus chinensis, and the other parent is the Carolina Allspice Calycanthus floridus, so the hybrid names could be Sinocalycalycanthus x raulstonii ‘Hartlage Wine’ etc. The hybrids are named for J.C. Raulston from the North Carolina University Arborteum, who did much of the breeding work.

Another example was Echinacea, with a brief history of the past 40 years of breeding. Crossing different species has greatly increased the range of not just colour, but form too, with doubles and novel flower forms available now. More examples followed. There will always be more of course. Remember the lavish acclaim that met the wonderful Geranium ‘Roxanne’? Well there is apparently a new one Geranium ‘Havana Blues’ that is an improvement!

So how long before a new cultivar is available?? That depends on what it is. A tree may take 10/15 years to show it’s form – wide growth, fastigiate, or in between – and flower potential or autumn colour, and then it will take another 10 years to propagate and grow on for sale. Shrubs being smaller may take only 5/10 years. Herbaceous are the quickest, maybe flowering in first year from seed, then through maybe micropropagation quickly into thousands, so say 3/5 years.

New plants come from many sources of course, several Irish nurseries have named cultivars too, to mention a few, Mt Venus, Tullys, and Ravensberg (via garden centres), support your local nursery!

An excellent talk, well presented, and delivered with an ease that spoke well of Ronald’s knowledge. 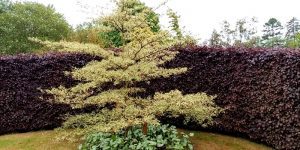 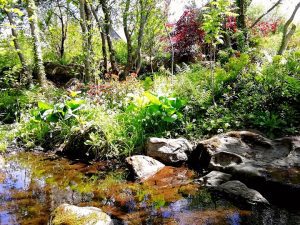 A warm welcome awaits you in the Library of the Castlecourt Hotel on Friday evening following check-in. Enjoy the opportunity to catch up with each other after our long absence. Saturday begins with a 9 am departure[...]
View Calendar
Add