The mild weather which has characterised our autumn continued right up until the start of December and allowed the IGPS volunteers at the Lismacloskey Rectory Garden to have a final clearance of the weeds which had run riot during the prolonged period while the Ulster Folk Museum was closed due to the pandemic and to enjoy some colourful late blooms in the winter sunshine.

Star of the show was Hypericum ‘Rowallane Hybrid’ with its waxy yellow flowers which has been in bloom continuously since March. Eucryphia ‘Rostrevor’ which would normally flower in August was also putting on a good show and some roses and hydrangeas added to the colour.

The birds have clearly enjoyed the rowan berries but there were enough left for Sorbus ‘Autumn Spire’ still to look stunning against the winter sky. Meanwhile the team gave the heave ho to buckets full of creeping buttercup and other unwelcome visitors – their dedication can be seen in the broken shaft of the spade and the unorthodox footwear of one of the team who forgot her gardening boots!

A last rose of summer!

Barbara's spade broke with the weight of weeds!

Carrie about to fill the next trug

Maureen with a trug full of weeds

One volunteer forgot her gardening boots 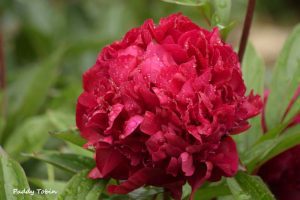