Daniel J. Hinkley spoke in Dublin around the year 2000, an event organised by the Royal Horticultural Society of Ireland at University College Dublin, and I can still recall the anticipation and excitement of attending that talk. He was a leading light in the world of gardening, a plant explorer and collector and the introducer of a vast array of the most interesting, unusual and beautiful plants. His book, The Explorer’s Garden, Rare and Unusual Perennials, published in 1999, became the handbook of choice for those in search for the latest and the greatest for their gardens and its pages were soon as well-worn as Graham Stuart Thomas’ Perennial Garden Plants, the de rigueur handbook until then.

The annual catalogues from his Heronswood Nursery were a perennial source of information and inspiration and, even though we couldn’t place orders from this side of the Atlantic, we could dream and search seed catalogues and check the lists of the more avant garde nurseries in hope – Crug Farm in Wales was always the best starting point as Dan Hinkley had travelled on plant-hunting expeditions with Sue and Bleddyn Wynn-Jones for many years and they had shared tastes and plants.

His Heronswood Garden in the Northwestern United States was internationally famous, a beacon of horticultural excellence, and place of pilgrimage for enthusiastic gardeners, but it eventually became more a millstone around his neck rather than the joy it initially had been and he took the brave decision to leave it behind. Leaving success behind is always a difficult decision but it gave him the freedom to begin a new garden, one informed by his experiences at Heronswood, his international plant-hunting travels and world-wide gardening colleagues and friends. This would be a garden for his husband, Robert, and himself, a personal garden, a garden full of the plants he loved, and he tells the story of the garden in his latest book, Windcliff, A Story of People, Plants and Gardens.

I always read an author’s foreword with great care and attention and I read it again after reading the book for, I imagine, most forewords are written after the body of the work has been completed as it’s the best way to accurately foretell what one is going to write. The foreword can often encapsulate the spirit of a book very effective as is the case here – and expressed so much better than I could:

“So, this book of carefully chosen words on Windcliff is my attempt to convey my thoughts on good gardening as applied to my own climate and surroundings. There is no magic or revelation; it has been said many times before me…

There are more approaches, more tricks of the trade, undoubtedly as many as there are good gardeners. Yet the yearning for beauty, whatever that may be, is the same. It is not intentional nor is it fully accidental. There is no endpoint or possession.

Perhaps making a garden remains simply an unending and clever conversation between our past and ourselves….It is the caprice to plant a tunnel of laburnum , which I have never done, or create a meadow, which I am trying to do quite unsuccessfully. It is plucking a ripening apple from the tree you planted with your father, or smelling the Philadelphus that once grew in your grandfather’s garden.”

As with Heronswood, he has created another beautiful garden and, from it, a beautiful book. He describes Heronswood as the brains and the brawn of Windcliff and the move from one to the other was with one load of furniture and six loads of plants. Much of Heronswood was in the English style, colour-driven with mixed borders all sternly controlled and managed yet it was the little bits of nature evoked in the woodland areas which most captured his soul, which most appealed to him, and which informed his approach to the new garden at Windcliff, a very different and very beautiful garden and “All of our really big mistakes had been left behind.”

The narrative of the book is an outline of process, a discussion of garden design, plant association, the value of foliage and fragrance, of views and privacy, of blending together house and garden and garden and setting, of the potager and the nursery, of influences and inspirations, of garden projects and a recognition, acceptance, even happy embracing that gardening is play, that success is often a matter of serendipity, that each moment is worth treasuring, that gardening dogma ought not dominate our gardening life and that we should be happy in our gardens.

While Heronswood was a performance for the public, Windcliff holds the soul of Dan Hinkley – “The enchantment of gardening, of collecting and cultivating and sharing, has as its greatest asset a remembrance of our existence, moment by precise moment… Individual plants have become my bookmarks in the madness of living life to the fullest on a planet that has the audacity to keep turning.” 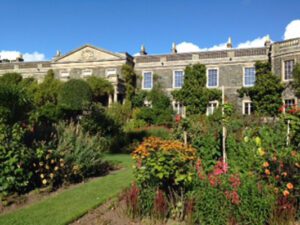